Check out this beautiful home nestled in the hills of Santee. This light and bright home features 3 bedrooms and 1 bathroom. Recently upgraded bathroom with tile floors. ...

Welcome Home to this upgraded 3Bedroom condo with private yard and laundry. These homes have a duplex feel the way they are situated and this one in particular is in a pr...

Fantastic Opportunity to Live in a Single Level 3-Bedroom 2-Bath Home in the Lovely Santee Lakes Neighborhood. Come Make this Home Yours. I've been told there is a Breeze...

Welcome to 10434 Rappaport Place! This is a 4 bedroom/2 full bathroom located in Santee. This property is very spacious. It's great for a family that needs room. A large ...

THIS IS THE ONE!! Beautiful newly built resort style home on a large private corner lot with over $160,000 in upgrades AND paid off solar! It is one of the largest lots i...

OWNED SOLAR SYSTEM FOR LOW YEARLY ELECTRIC BILLS! This is the home you have been waiting for! Front of home faces the luscious green belt; enjoy your morning coffee on th...

Light, bright, beautiful! This highly upgraded home is everything you are looking for. Featuring an open concept kitchen with oak cabinets, granite countertops, recessed ...

Don't miss this highly sought after end unit Bella Vida. This beautiful multi level home will fill everyone's needs. From the marvelous kitchen to the Living room with f...

This beautiful 4 bedroom 3 bath home was built in 2011 in the quiet neighborhood of Mountain View. This contemporary home features a spacious kitchen with double ovens, e...

This is an opportunity to get into the New Frontier Mobile Home Community for substantially less, and make this home YOUR own. 2 bedrooms, 2 bathroom, 1344 sq ft + a pati...

Based on information from California Regional Multiple Listing Service, Inc. as of . This information is for your personal, non-commercial use and may not be used for any purpose other than to identify prospective properties you may be interested in purchasing. Display of MLS data is usually deemed reliable but is NOT guaranteed accurate by the MLS. Buyers are responsible for verifying the accuracy of all information and should investigate the data themselves or retain appropriate professionals. Information from sources other than the Listing Agent may have been included in the MLS data. Unless otherwise specified in writing, Broker/Agent has not and will not verify any information obtained from other sources. The Broker/Agent providing the information contained herein may or may not have been the Listing and/or Selling Agent.

Santee Homes and Condos for Sale

Updated every 5 minutes with the latest real estate for sale in Santee.

The City of Santee is a growing city located just 15 minutes from Downtown San Diego. Santee neighbors Lakeside to the East, El Cajon to the South,  and San Carlos to the West/Southwest.  Located just 18 miles, this bustling city of over 50,000 residents has the highest per-capita income of all East County cities.

Santee was originally home to the Kumeyay Indians who occupied Sinyeweche, a village on the banks of the San Diego River. Jennie Blodgett, who was originally married to George Cowles, a ranching pioneer in San Diego, named the town after her 2nd husband, Milton Santee.

In 2011, Santee added the highway 52 extension which connects Highway 67 to Highway 125/State Route 52. The new freeway extension allows an alternative route of travel for residents in cities such as Alpine, El Cajon, La Mesa, Lakeside and even the South Bay. State Route 52 begins in Santee and runs all the way to the coastal city of La Jolla. 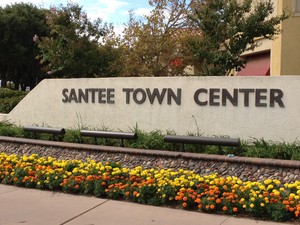 The largest and longest river in San Diego (San Diego River) runs directly through the town of Santee. The San Diego River is considered a greenbelt that occupies more than 1000 acres of natural undeveloped habitat.

Santee has approximately 20,000 households. During the 2010 census, it was determined that the median household income was $79,000, over 20% higher than the state average. Known as one of East County’s fastest growing towns, Santee also has one of the lowest crime rates in all of San Diego. The combination of vacant land, an ambitious general plan, and high median household income make Santee a desirable place to buy real estate as well as property development.

In 2010, the Santee Sportsplex opened its fields. This area of Santee has over 10 baseball fields, a community pool, a YMCA Center, a football field, soccer field, and hockey court, and batting cages. Santee is also known for its challenging Carlton Oaks Golf Course. This legendary Pete Dye designed course has been host to many junior events, as well as PGA tour qualifying events in past years. A 50 room hotel is located just behind the courses driving range.

In 2006, Stephen Strausburg graduated from West Hills High School. He later became the #1 player selected in the MLB draft. He also signed the largest rookie contract in baseball history. Santee was unfortunately thrusted into the national spotlight when a 15yr old Santana High School student opened fire on the campus. 2 students were killed and over 15 students and teachers were wounded. The gunman was sentenced to 50 years to life in prison.

The San Diego Trolley’s Green Line originates in Santee Town Center and can take residents as far south as the Us/Mexican border. Just east of the highly touted town center, is the Las Colinas Detention Facility, the woman’s jail has 750 beds and also occupies 11 acres of prime Santee Real Estate.

The Santee Town Center also offer a Bluegrass festival every September. This even gives residents the opportunity to taste specialty wines, beer, food, and also participate in a silent auction with prizes donated by local companies such as Taylor Guitar. The proceeds from this event go towards Santee's youth as well as the recreation areas within the cuty.

Similar to El Cajon, Santee is located in a valley surrounded by rolling hills. With an average of 300 ft. above sea level, the city pales in comparison to Cowles Mountain. Cowles Mtn. borders Santee and is located in the Mission Trails Regional Park and is also the highest point in San Diego. This unique landmark offers an escape for hikers, bikers, and rock climbers. Once atop this popular hiking destination, you can see as far north as Catalina Island and as far south as The Coronado Islands and Mexico.

Mission Trails Regional Park, one of the city’s largest attractions, encompasses nearly 6,000 acres of natural terrain. Mission Trails has been touted as one of the largest “urban” parks in the US. Kumeyaay Indians originally occupied this lush area. The Mission Dam (located inside the park), was originally used for water storage to assist the Mission San Diego de Alcala. Nearly 40 miles of trails, boating, and camping, make this beautiful park an attraction for people looking to buy Santee Real Estate.

There has always been a desire for Santee Homes for Sale. The median sales price in this East County community is $291,000, which has dropped over 40% since its peak in 2006. There is on average, around 225 Santee Homes for Sale at any given time. The median home value in Santee is nearly 24% less than that of California and over 60% greater than that of the United States as a whole. Santee however has higher than normal rental rates. The average rental price is $1,600, while the state average is only $1,350.

If a person were to invest in Santee Real Estate, they could very well have a mortgage payment similar to that of a rental home. If a Veteran uses VA financing to buy a Santee Home for Sale at the median price is $291,000 at 4%, the monthly Principle and Interest payment would only be $1,389. That is nearly $200 LESS than renting. There has not been many times iin recent history where buying a Santee home has been cheaper than renting.

Santee is home to many of East County;s best parks, recreation centers, and athletic fields. In 2010, Santee Sportsplex was opened. It is one of only 3 such parks in California.

Arguably Santee's main attraction is Santee Lakes.This lake recreatio area features, 7 man-made lakes, hundreds of camping spots, a general store, boat rentals, and much more. The area around the lakes is considerd the best place for Santee Real Estate as it is close to recreation, schools, and highways such as State Route 52 and Highway 125.